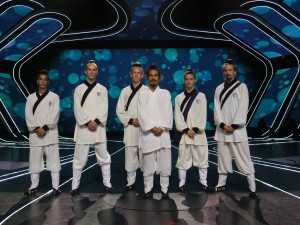 I’ve fallen out of my rhythm with my blog for the last month or more, on account of all the exciting goings-on here in Wudang.

The biggest holiday of the year in China and many other Asian countries it the Spring Festival, the new years celebration of the traditional lunar calendar. Much like watching the ball drop in New York City for Americans, Chinese television features one big gala TV event on the eve of Spring Festival. It is a sort of variety show, with different acts over the course of the evening, celebrity MCs, and lots of pageantry. But while Wikipedia says that 22.6 million Americans watched Dick Clark’s New Year’s Rockin’ Eve in 2012, past Spring Festival galas have had a viewership of 700-800 million, while this year it is projected to reach a billion people.

When I say exciting goings-on, I mean that my classmates and I have the opportunity to compete for a place on this show. In the end of August, five of us choreographed and rehearsed a demonstration of Wudang kungfu that we traveled to Beijing to perform on a competition show called 我要上春晚 (I want to perform New Years Eve). We won, and then our entire class won a second round of competition in September. We will do one more round in early December, and if all goes well we’ll be in Beijing for a chunk of January preparing for the big event itself.

First, of course, we would never be considered for such an event if we had not put a great deal of effort and dedication into our training already. We are foreigners who are seeking a deep understanding of a uniquely Chinese philosophy and tradition that is even beyond the comprehension of many natives of this language and culture.

However, it is hard for some of us to adapt our outlook to an entertainment environment. I don’t think anyone would ever endure the training we have done in order to get on TV — there must be easier ways. So it is difficult for some of us to accept that the culmination of more than four years of deeply personal struggle and agonizing progress, which each of us has undergone for personal reasons verging on religious conviction, should be the seemingly trivial outlet of television performance.

Second, there have been endless challenges of planning and re-planning. The director of the show is understandably busy managing and orchestrating all the many acts vying for a place in the show, so our performance dates have been changed and changed again. And again. This would not be a problem any other time of the year, but with it being illegal for us as foreigners to stay in China for more than 12 months at a stretch without crossing the borders, and our regular yearly holiday falling in December/January, my classmates and I have been put to great effort and expense adjusting flight bookings and travel plans over and over.

I am lucky, and unlucky. Because I stay in America longer than my classmates in order to save the money I need for training each year, my 12 months in-country will not be over until March. But that means I must stay through the holidays and miss Christmas with my family and friends, and that is a bit of a downer. But even if this once-in-a-lifetime opportunity is a bit of a double edged sword, I am pretty excited to be part of it.

I do not know for how long this link will be active, but here is our performance in round one of the qualifying competition. Not bad for a start, but we can and will do better.

Last year Megan O’ Rourke put on a demonstration of her martial arts skills at her school. This year she was joined by 6 of her fellow classmates; Kaeo, Kalani, Matthew, Zach & Maggie. They worked hard the weeks prior to the show to come out and show their best. I was very happy to be there to support them. Here is a video of their performance and an after show interview!