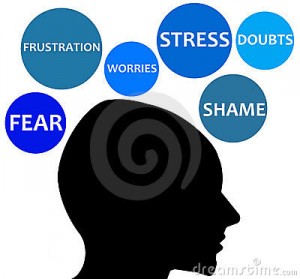 I want to tell you a story about two people that went on a camping trip.  Neither of them were seasoned campers, but it sounded like fun.  They got all of their gear together – probably a lot more than they really needed.  They packed up the car, and off they went on their adventure.  They got to their camp site and set everything up and all was fun, until two days later the rains began.  Oh yes, not just the rain – but the wind too.  It blew so hard and the rain was coming down sideways.

The two campers were scared as the winds grew stronger, pulling the stakes out of the ground and they were getting wet.  They were so miserable.  Finally deciding they could take no more they abandoned the site, found a cheap hotel and spent 2 days in the hotel with nothing to do but watch a small black and white TV.  No fun activities, no sight seeing,  nothing to do.  Soon the rain stopped and they went back to the camp site to retrieve their equipment, only to find that it was destroyed.  What was not destroyed was missing.  They  were devastated.

Two people with the same experience.  One of the them could not wait to tell their friends how they had survived in the “wilderness” and the other was in a total state of depression.  Embarrassed about not seeing the weather ahead, the destruction of the equipment and disappointed about the event.  How could one see the trip in a positive fun way and the other on the same trip be totally depressed about the same trip.

Self talk and control of thoughts totally determine our attitude.  If we do not be careful about the way we talk to ourselves and careful about not magnifying our beliefs or thoughts, the same may create a lot of stress for us and this could be a trigger for anger.

What is worst about the anger at this level is that we may direct our angry behavior towards those who do not deserve it and we will suffer again when we look back on our actions in that state of anger.

William James once said, “The greatest weapon against stress is our ability to choose one thought over another.”