We have all seen them, the bad sports parent. You know the one I am talking about: the mom or dad who gets so caught up in winning (or losing) and on how well their child is performing that they forget the most important part of competing… being a good sport.  THAT parent who constantly yells out commands to their kid, “Stop kicking the dirt. Pay attention Johnny, look alive! Put your hat back on. What are you doing out there?’ Or maybe THAT parent the one who blames everyone else if his child messes up; “Are you kidding me ref do you need glasses? That was a foul!!!”  Then there is the worse of them all; THAT parent, the one who shouts insults and passive aggressive comments at the players of the other team, saying things like, “my grandmother can bat better than that!”

Most likely you are not the one who is yelling at the umpire or calling the opposing team’s pitcher a few choice words, but, you still could be THAT parent. “Not me!” you may be thinking, I would never be THAT parent. I respect the coaches and the referee’s decisions and I always encourage my kid to do the same. Or do you? 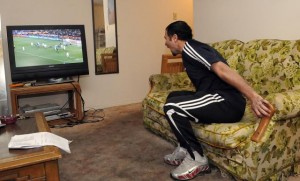 Its Sunday afternoon football and you have been waiting all week for this game. You are sitting back relaxing in your easy chair when your team’s quarterback throws the ball that is intercepted and the opposing team runs it all the way for a touchdown. But wait there was flag thrown. You are positive it will be called on the other team and therefore the touchdown will not count, but nope it is against your team and the 6 points stays which just so happens to mean your team loses the game. You are angry and you let that referee on that little screen know exactly what you think of the bad call. Voicing your disappointment makes you feel, well better. No harm, right? WRONG! Because while you are ranting, and blaming and basically throwing a small fit… little Johnny could be watching. And since children learn the fundamentals of sportsmanship from the grownups around them, it can still affect the kind of sport they will be.

Remember that old saying, “Actions speak louder than words”? Well it is particularly true when it comes to teaching our kids the basics of good sportsmanship. The behavior we have during practices, games, while sitting in the stands or in our own living room watching a game on TV matters more than any lecture or pep talk you can give them. So the next time you want to talk back to the TV set and complain about a foul ball, a missed pass or even your candidate who lost the senate race… think about who is around watching and how you would want them to act, and then act that way yourself. After all, you don’t want to be known as THAT parent do you?