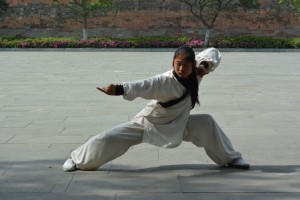 One of my kungfu brothers and I were talking about talent the other day. We were talking about this guy my brother had seen on a TV program, who could shoot objects out of the air with a bow and arrow as easy as breathing. Apparently this man had picked up a bow some time when he was young, and on his first shot discovered he had a knack for it. He then spent his whole life honing this skill until it was practically superhuman.

Here in Wudang, I’ve seen talented people come along, who, without apparent effort, are able to do things that I only wish I could do: jump higher than their own height; kick as quick and sharp as a punch; bend their bodies into astonishing contortions; dodge punches with incredible reactions, etc. There are even people who show a natural affinity for the internal, emotional practice I’ve talked about, and seem to approach the rigors and trials of life in a kungfu school with a calm placidity I envy.

But I do not think talent is really what kungfu is about. Kungfu is not about making naturally athletic and ferocious people better at beating people up or doing incredible acrobatics. It is about finding one’s weaknesses and strengthening them, and then finding the next weaknesses and strengthening those, ad infinitum. I think, from this basic tenant flows all of kungfu’s virtue. Building up where one finds weakness makes for a balanced and healthy mind and body. And the emotional ability to look at one’s own failings day in and day out without giving up on your own self worth is an incredibly powerful skill, engendering calm and poise.

It is in regard to this last quality that talent can actually be a hindrance. No matter how lucky you are, eventually you reach a point where talent can’t carry you any further, and work is required and those weaknesses have to be confronted. There have been plenty of students who get as amazing at kungfu as they can on talent, and sort of plateau, get frustrated, and leave.

Talent or no, the real fruits of kungfu are found when the talent stops and the hard work keeps going. The talented people who also apply themselves and practice, like the archer mentioned above, achieve amazing things. But there is plenty that the rest of us can glean from applying the kungfu model to the things we do in our lives.