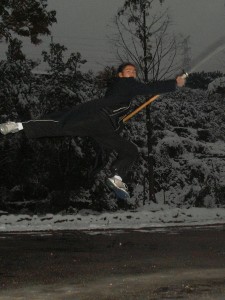 Today one of my favorite of my Chinese older kungfu brothers left to try to make his own way outside the kungfu school. Yuan Huailiang is a great young man, the kind of guy I look up to a lot, even though he is years younger than me and has seen less of the world. For one thing, he is an incredibly gifted athlete: his every movement exudes grace and strength that I envy. But more so than that, he is someone I have watched change into a really calm, confident, open person.

When I first came to Wudang and met Huailiang, when he was maybe 17 or 18, he seemed like kind of an angry kid. I remember sitting down at a meal across the table from him. I was already a little in awe of him, having seen his kungfu and how he moved, but as I sat there across from him he fixed me with this stare. He later told me that he had actually practiced that look in  a mirror a bit. It was the look of a predator at a watering hole, incredibly dangerous but for the moment tolerating your presence. I don’t think he wanted me to sit with him 🙂 I thought, “Wow, this is a powerful kid.” But it was also an angry, unhappy kid.

Being in awe of his kungfu and raw attitude was cool, but what is better is how he soon after grew out of that angry phase and seemed to find himself. His emotions calmed down, he became much more focused in his teaching and training, and though he to this day maintains a little of the crazy that I first glimpsed at that lunch table, it is channeled through easy laughter and playfulness. Last summer we were playing hackysack. When we kicked it to him he immediately started volleying it high in the air, letting it drop through the loop of his arms, and kicking it back up time and time again with a completely spontaneous aptitude for the game. He just laughed, a pure expression of joy, as we chased him around trying to get the hackysack back. That light heart does not keep him from his responsibilities, however, and he is one of the best, most capable and thoughtful coaches our school has had.

What I want to illustrate, through my little anecdotes about Huailiang, is the value of having a culture where people are expected to change. Shifu is always encouraging us to develop and grow at a very fundamental emotional level, and of course teaching us techniques to effect that change. That is what I had the pleasure of seeing Huailiang do – completely change his outlook, practically overnight. And I have seen many, many foreign students do the same thing. I really give a lot of credit to that atmosphere of expectation that grants the freedom for us to re-define ourselves. In other places and times of my life, I have felt as though I had to continue to be who I had been because that was what others expected of me. I do not feel that here — the expectation is that I will change, that I will become better and better.