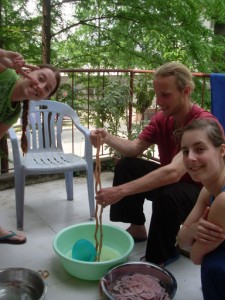 Last weekend I had intended to post a new blog, but it didn’t happen. Why? Sausages, that’s why.

How many of you really LOVE a good hotdog? Before I came to China, hotdogs were very low on my list of favorite foods. At a cookout, I would pick a hamburger over a hotdog 7 times out of 10, perhaps. But everything changes when we are separated from the loving embrace of our mother culture. When I was home a few months ago, and had opportunity to eat whatever western food I wanted, there was no single mouthful of food that so filled me with joy as a hotdog, on a bun, with ketchup, mustard, and relish.

So I decided China needed hotdogs. Maybe part of what makes hotdogs so enticing to me is the fact that there are hotdog imposters everywhere here. These things, called huotui (fire legs) look exactly like hotdogs should look but lack any of the flavor of their ballpark cousins. They are lengths of flavorless processed ham — even spam is better. But one sees them and is duped, thinking, “I could really go for a hotdog right now.”

So I set out to make some hotdogs. First, I looked at recipes online. They all looked simple enough. I needed sausage casings, meat, certain spices — “I can do this,” I thought to myself. So I poked around town, asked the cook at the school questions, and after a few weeks of dead ends, false starts, and re-thinkings, I eventually believed I had a workable plan.

On Wednesday I set out to make sausage casings from the pig intestines. I knew this was going to be a lot of work, but it was A LOT OF WORK. Remember, a pig has quite a lot of intestines. I think I cleaned, turned inside-out, cleaned again, scrubbed with salt, soaked in brine, cleaned again, scraped with a butter knife, and cleaned again about 50 feet of intestine. This was almost constant work Wednesday afternoon, Thursday morning, and Thursday afternoon. By the end, we had beautiful fine translucent sausage casings, but I had just about had it with the whole sausage making idea. But I was not done.

I then ground, seasoned and blended the meat, and then we had to figure out how to get the meat into the sausage casings. Every website I read said that there were ways to do this by hand, but they all pleaded with me to buy a machine because it was not worth the effort of the manual methods. “Hah!” I laughed confidently. After all the hard work of making the casings, my poor brain was not at its best for sausage stuffing innovation. We tried a method with a spoon and a funnel, and we tried a method with an improvised cake piping bag, but when we finished stuffing, cooking, eating (delicious, btw, no complaints here), and cleaning up around 9:00 Thursday night with the prospect of 5 AM training the next morning, we all agreed that a machine was the way to go.

Otto Von Bismark once said, “Laws are like sausages, it is better not to see them being made.” With all the mess of governing we see broadcast in the news, and with most of us getting our sausage from the supermarket, I think the quotation might well be reversed to better reflect popular familiarity with the two subjects. How’s this — Sausages are like Laws: You really have no idea how they make these things.

p.s. This was really a great learning experience, and if my casings keep ok packed in salt, we’ll have more chances to work on our stuffing technique this summer. 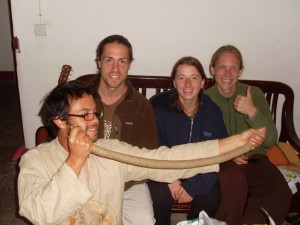 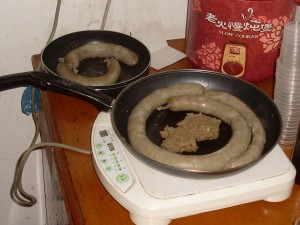