In many ways, Aikido is a lifelong journey. There’s always something to learn around the corner,always something just out of reach. This is what makes practicing Aikido so rewarding. You are always on the path, and the path never ends. I have practiced with Aikido practitioners who have been on the path for many years but never tested. Their Aikido was no worse than those students who pursued rank. The Aikido journey is not one of rank. It is one of personal development.

The journey of Aikido—and all martial arts—is not driven by the attainment of rank or recognition.These are external things that contain no inherent value; things you show to others to gain the recognition and admiration of others. The things that matter: technical skill; personal confidence;and the ability to teach others have nothing to do with a particular belt. A practitioner of the “lowest” rank has the ability to welcome a new and unranked student and show them what he or she knows. Likewise, the “highest” ranked student has every opportunity to learn something new from even the newest class participant through the act of instruction.

When we as martial artists start personally identifying with a particular “rank” or colored belt, we are at a very high risk of technical and philosophical stagnation. Such a personalization of rank is very dangerous for several reasons.

First, if we identify too strongly with a rank, we are effectively closing off our ability to learn from everyone on the mat. A white or yellow belt has the potential to teach a black belt just as muchas—if not more—than the dojo instructor. The mechanism is different, but the learning is the same. An instructor imparts a technique by describing and demonstrating it to the students. An advanced student learns from a beginning student through the act of instruction. Having to describe and show the technique in a way that the beginning student understands is the highest educational experience for the more advanced student.

Additionally, focusing on the attainment of a particular rank can very often get in the way of focusing on what’s important; internalizing the techniques and developing a deep sense of how the techniques work best for your skill level and body type. The rank means nothing, your mental and physical ability to internalize the skill set is the greater focus.

Finally, a myopic view of rank and belts within your specific school ignores the broader context of martial arts. In all Japanese martial arts systems, a practitioner is a white belt until they are awarded a black belt. I say “awarded,” because there is no test. When the instructor feels that a particular student has achieved a certain skill level, that student is given a black belt. There is no test, no ceremony, and no recognition. It just is. Often, this process takes 10 – 12 years. 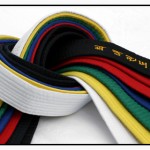 Further undermining the idea of a particular “colored belt” meaning anything is an examination of the Tae Kwon Do rank of red belt. In Tae Kwon Do—a Korean martial art—a red belt symbolizes the highest ranking non-black belt student. However, in Karate—a Japanese martial art—a red symbolizes the absolute highest level of mastery, a 9th degree black belt which is only earned after a devoted lifetime of study and training. The Korean red belt was deliberately adopted to make a social and political statement against Japanese supremacy and occupation during
World War II.

So what does a belt mean? Why are there colors? What does rank mean? What does a test mean?The answer is nothing, and everything. A belt, or obi, is a tool to keep the gi top closed, and the pants up. It is nothing more. If your school has adopted a colored belt system, the purpose of a belt is not to be “above” your peers. Rather, the colored belt serves as a declaration to other students concerning what you are able to teach them, and identifies who the lower ranked students should goto with questions. A test is not a particular moment in time. A test occurs every time you step on to the mat, every time you practice, and every time you learn.

Ultimately, if you are striving to attain rank, you will never truly achieve it. Rank is not a static or singular  entity or status that can be captured, conquered, owned, or mastered. If you cannot see and appreciate your technical and philosophical progress independently of colored belts, testing, and attaining rank, you have not fully understood the essence of the martial arts journey.

One Reply to “Martial Arts Testing and Getting Rank: An Aikido Perspective”