New Years is a time of the year when many individuals set out on goal setting, yet only 8% of them say that they always keep their resolution, while 75 percent say that they never complete their goal or resolution.  So what happens?  What is it that stops people from persevering until they reach their goals?

The fear of failure is one of the largest one’s that affect young and older individuals. But here is an idea the next time you start to give up on a goal because you are concerned about what might happen if it does not work out for you.  Make a list of what the worst outcome would be if you failed and beside it a list of what the best outcomes would be. Now weigh it out and see if the worst is so bad that you are willing to give up the idea of trying and the possibility of success.

The lack of determination is what is lacking in many individuals as they try something new.  If they are not good at something the first time they try it, then they are inclined to drop it.  Michael Jordan is a good example though for being the league leader in missed shots on the basketball court.  Oh yes, he is also one of the best players of all time.  Rather than looking at failures as game ending problems, look at setbacks as a problem to overcome.  If you are willing to do that you will be willing to be creative and persevere in overcoming the challenges. 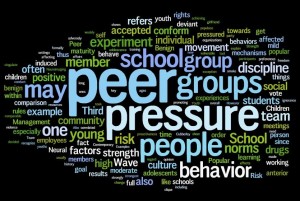 Peer pressure can be very difficult.  Don’t think you are effected by others?  Think that you are your own person?  Have you ever said, “But Mom, everyone is doing it!”  That is giving in to peer pressure.  There will always be peer pressure and many times it will be to do things that you know do not fit in with your goals.  If you want to learn to play the piano, be a black belt, go to college and learn to be a scientist, there is a certain amount of practice and time needed to reach your goal.  It is your responsibility to stay focused and persevere on to your goal.

Excuses, excuses, excuses.  The world is full of people who make excuses for why they can’t do something.  We have all heard “the dog ate my homework” one.  As adults we know that won’t work in the business world.  But we should not let any of the other excuses we make up and believe in our own head to stop us from reaching our goals.  We must use our determination and perseverance.